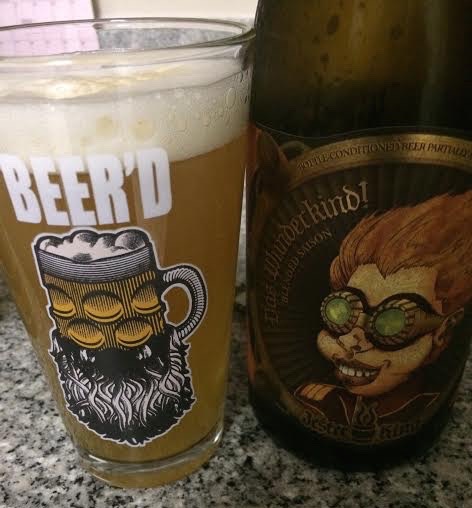 I am beginning to try a few sour beers. It seems to be a pretty big trend sweeping Texas. I have been down to Jester King which seems to be one of the biggest sour beer producers around. I tell you the brewery is beautiful and these beers are totally brewed in a way that’s down my alley. OF
COURSE being in the health care field, I tend to agree with the adding of good bacteria to ferment things. This brewery is totally in to that.

Sour Beer is very unfamiliar to me so forgive my rocky critique. As for Das Wunderkind,  It tasted straight up tart! This tartness included lemon and lemon peel mixed with war head (this is the only thing I can associate it with) and fruit loops? a kind of green apple taste too and there is a weird taste I can’t peg.. but its kind of wonky like this guy’s face! 3 out of 5 from a skeptic* A big thanks goes out to my patient, KC! This was a good solid sober entrance to my sour beer adventure! The few other beers from the Jester King were pretty good, the Snorkel was strange and oyster infused (loved this beer- but only cold)! and La Vie en Rose-I remember this one being kind of berry like and light! This brewery is something to definitely check out! they are available in most Whole Foods and little beer places in Dallas!

The first beer of the night was the Cobra Donut Dunker… it kind of tasted like if you walked into a Dunkin Donuts that was smoking friendly. There was coffee, donuts, and smokiness. 2 out of 5.
The next beer was a christmas regular wheat ale! Victory, Winter Cheers Wheat Ale! Pretty dern good! There was a head that went on for days (AHS reference to my fellow fanatics)! The smell was light earth grassiness/ wheatness with a light wind of christmas wood burning in the air. The taste was actually kind of sour, but perfect… There was also a good amount of spiciness with a floral hint,  it left a slight stickiness and a light sweet ending. 3 out of 5

P.S. BTW’s this Saturday I will be participating in Beer Yoga at Community beer and will be trying the funnel cake deliciousness that they have! Stay tuned for that!