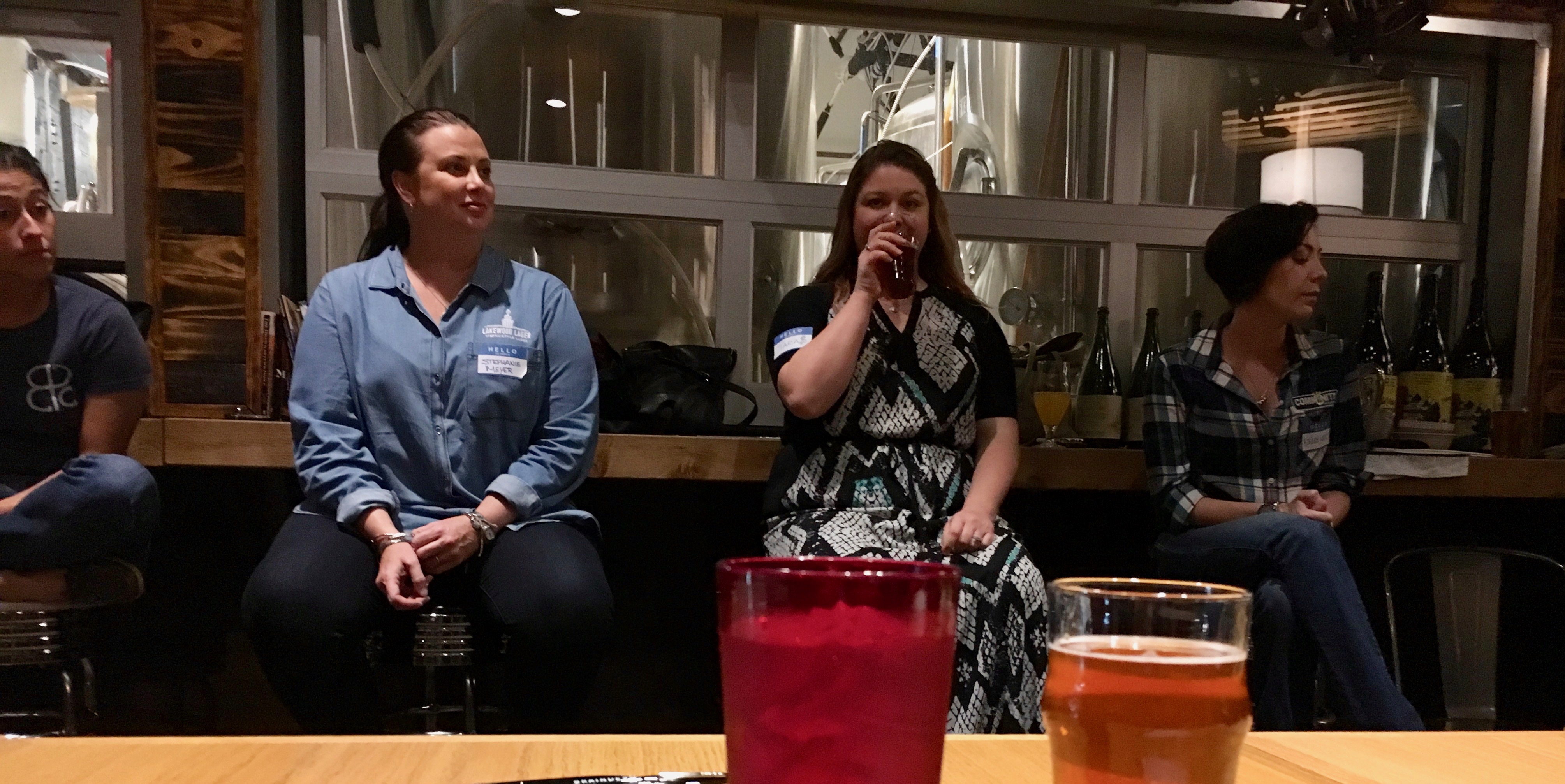 One of the subjects brought up was the question of “Is craft beer selling out to the big corporations really that bad of a thing?” They believe that it’s ultimately up to the consumer! Will you stick by your favorite craft brewery as they transition to the big corporation because you love the beer they brew? Or will you bail because you believe firmly that “selling out” is a bad thing for craft beer. Here recently two of our Texas craft breweries, Revolver sold to Miller Coors and Karbach sold to InBev. While many in the industry are upset with the recent news, others have just accepted the fact that the big dog is going to continue to eat up some of our favorite breweries.

The main thing I took from this event was that if you’re a woman and you have a desire to be in the craft beerworld… Don’t be shy, just do it! Where do you start? Start with volunteering at your favorite brewery; this will help you decide if the beer industry is right for you. The time is now. Even if it means you need to volunteer at your local brewery or get involved with grassroots… DO WHAT YOU LOVE.

At the end of the day craft beer is about family and fellowship. Enjoy your beer but remember to love who you drink with and who you surround yourself with.

Thanks to our awesome waiter from last week, we were given the heads up on a very rare tapping for North Texas Beer Week. What was this rare tapping? It was the sought after Firestone Walker XIX.

I called up to whiskey cake yesterday to know exactly what time that they were opening this dark goodness to the world and I was put on the phone with a cool dude named Billy, he gave me all the details of the tapping. I arrived to Whiskey Cake with the highest of blood pressures; this was due to the insane 6 o clock Dallas traffic! Once there I met Tyler who is the Firestone Walker Rep, he presented me with a beautiful beer that was a dark brown with a hint of red. Thanks for the Brew Tyler! I took a smell of the beer, it smelled of toffee, caramel, leather, vanilla, and bourbon. I took a sip and tasted chocolate, caramel, bourbon, figs, and a slight oakiness. Oh, what a wonderful tasting beer.

We finally settled into our chairs only to have Billy the manager come up and talk to us! I asked him how he was able to get his hands on this rare keg. It turns out that one of his favorite breweries is Firestone Walker so he does not let Tyler very far out of his sight when ordering things. Great Food, Great Beer, and Great Company!

The Bearded dad and I hit up a local restaurant called Jack Mac’s Swill & Grill to take part in a tap take over! This place is a hidden gem full of beer and tasty grub. Legal Draft and Cedar Creek were the stars of the night! As we walked up on a warm November eve (make up your friggin mind Texas!) my tummy was grumbling for the stuffed poblano and a matching Pablano Dankosaurus IPA. We sat at a cozy booth in the corner only to realize that we had to order a flight to get all the brews! My flight was filled with (from left to right)

Legal Draft Smash and Grab-pretty smooth for an IPA, but a very easy drink. light hops, light malt, and a hint of citrus 3 out of 5

Cedar Creek Pablano Dankosaurus- Holy moly, this trampled me with its Strong poblano taste but kept its dank hoppiness with hints of peach and orange, texas freshly mowed grass, with a nice malt to end. It’s so hard to keep the beer in tact while adding spice! 5 out 5

Legal Accused Amber- Ambers are not my favorite! This one was so tasty. I would actually order this beer! It had a great brown sugar entrance with a deep nutty taste, with a slight hops and biscuit flavor. 4 out of 5

Chief Justice Stout Legal – A solid stout. This had a slight walnutty taste and woodsy smell gave this beer a little independence from just your regular old stout. 4 out of 5

I briefly got to chum it up with the reps at Swill and Grill before they had to head back to pasting stickers on their new brews and driving all the way back out of Dallas! Pretty neat guys that love beers! Love what you’re drinking and love who you’re drink with!